But Greenies always do want to restrict access to natural features by non-Greenies. It's stark elitism.  They think they are the only ones who deserve the privilege of entering natural areas.  Only they have the "sensitivity" required 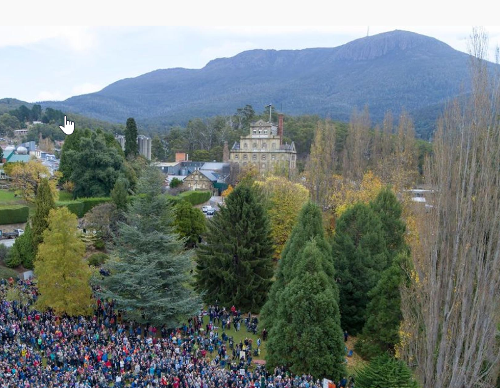 It's just another local mountain

Thousands of people descended on Cascade Gardens in South Hobart to protest against a plan to run a cable car up to the summit of Mount Wellington-kunanyi.

So many people were packed into the park for the Mountain Mayday rally — held near the proposed base station for the project — that some had to stand outside the fence on the road in order to see.

They said the process for the cable car development had been corrupt and lacking transparency and community consultation.

Mr Flanagan talked down the likelihood the cable car project would ever get up, likening its chances to MP Rene Hidding getting the Speaker's role that was snatched away from him by fellow Liberal Sue Hickey earlier this week.

"Rene Hidding's more likely to become Speaker than you can believe a word the cable car company says.

"The cable car company says they'll take the kids free up to the top of the mountain.  "Well, I've got some news — the mountain's always been free. Kids have been enjoying it forever and I was one of them.

"I've loved the mountain since I was little. To have this wonderland, this thumb of the southwest sitting itself into the pie of our city always seemed to be a miracle.

"I've walked all over it, camped in snow caves as a kid, I climb the zig-zag most weeks, I've watched the snow swirl round the columns of the organ pipes and I've walked on into the wonder."

Referring to the state's housing crisis, Mr Flanagan asked: "Why is this government more interested in building a cable car than houses for the homeless?"

Bob Brown said "kunanyi is in our safekeeping and kunanyi will be saved from this cable car".

"This is a monumental achievement to get so many of us so cross," he told the crowd.

"In the last week, I had one person who supports the cable car say 'but it really should be publicly owned'.

"I heard someone else say I support the cable car and I think it should be privately owned but I'm worried it's going to be bailed out by the taxpayer."

Government Minister Michael Ferguson said the process was transparent and had been proven so.

"You couldn't be more transparent than the Minister for State Growth [Peter Gutwein] cancelling a permit to ensure best practices are being followed," he said.

"There is a Green constituency in Tasmania that will never accept any development on Mount Wellington and that is what you are seeing.

"We understand there's different points of view on the cable car, but overwhelmingly people of Tasmania do support that [the cable car], voted for that and expect us to get on with it."

Luke Martin from the Tourism Industry Council of Tasmania said the public needed to consider the alternatives.

"Within a few years there is likely to be more than a million people heading to the summit each year," he said.

"It is simply unsustainable to continue to have more and more vehicles and tour buses driving up a century-old road and a seemingly ever-expanding car park.

"What do they propose we do? Shuttle buses that mean expanding the summit road? Limiting visitor numbers through some kind of fee or quota system?

"Ironically, across the globe it is conservationists who are pushing for the development of cable way technologies."

On Monday Mr Bold said the MWCC was not deterred by the protest and the large turnout.

[It] doesn't necessarily change our view of what the social licence should be," he said.

"We're quite aware that there are hundreds of thousands of people who didn't go to Cascade Gardens. "We've been listening to the people for a good six, seven-and-a-half years now and meeting with residents one-on-one, collecting and responding to thousands of emails. "We just have to stick it out, essentially."

The proposal from the MWCC has faced stiff opposition from conservationists and sectors of the Hobart community since it was announced that preliminary drilling works had been approved days before the state election.