Who the Devil is Emerich Kalman? His name goes close to being totally forgotten these days but in the first half of the 20th century he was much acclaimed.  His music was so popular that Hitler even offered to make him an honorary Aryan (Kalman was Jewish) -- an amazing distinction, whatever else it was.  Kalman declined the offer and got out of Europe while the going was good.

But there is one place these days where he has not been forgotten: Moerbisch. Moerbisch is as near as you can get to being the world headquarters of operetta. Situated by a lake in Austria's beautiful Salzkammergut (Lake District), Moerbisch is to operetta as Bayreuth is to Wagner. Performances at Moerbisch are lavish. Huge sums are spent on them to make them as good a performance of the work concerned as you can possibly get.

And the audience at Moerbisch is amazing in its vastness. When the cameras cut to the audience you can see that their claim of huge audiences is fully believable. The audience goes on forever. It looks like half of Vienna is there. Does any other stage performance have an audience that big? I know of none. Perhaps in Russia.

The Moerbisch performances might almost be called "definitive" performances except for one thing: No two stage shows of any kind are ever the same (except perhaps for Shakespearean performances). The original script is taken as not much more than a set of suggestions in many cases. The producer on each occasion feels free to cut bits out and put new bits in. And for the light entertainment that is operetta that is particularly so.

That seems to me disrespectful of the talent that made the show notable in the first place but it can help by making a show more relevant to a particular time and place. And the great resources of all kinds now available in the early 21st century greatly expand what can be done -- things that would probably not be dreamed of by the original author -- but which do expand the watchability and impact of the show.

And having the great resources of Moerbisch aplied to an operatta by Hungarian composer Kalman certainly produces very good musical theatre indeed. I have recently watch the 2004 Moerbisch performance of Kalman's Graefin Maritza and was quite gripped by it. The plot of the play is the sort of folly you expect from operetta -- with everybody living happily ever after by the end of the show -- but the acting and the singing were as good as can be.

And Kalman's music was both lively and inclusive of some very catchy songs. I am in fact rather amazed that the Varasdin song is not better known. It is very fun and catchy indeed. The inhabitants of the fine city of Varasdin in Northern Croatia are probably not too keen on the song as it portrays Varasdin as home to 18,000 pigs -- when Varasdin has much grander real claims than that.

Tenor Marko Kathol leads the Varasdin scene and I was much impressed by his talent. I have watched that scene over and over again. With Kalman's music and the spirited performances by both Kathol and the "Graefin" (Dagmar Schellenberger), it is so beautiful that it tends to make me weep at times (Even when sober!). I have looked Kathol up and it seems that others share my very favourable impression of his abilities. That he is a former ballet dancer certainly shows in the flexibility with which he moves

Viennese operetta has a sort of frantic gaiety about it. It came into its own in the aftermath of the ghastly WWI and no city was more impacted by that war than Vienna. It lost something like 90% of the territory it once ruled. But, being the city of music, Vienna rose to the occasion and produced entertainment that both lightened the spirits and took people back to happier days. The operettas are most set in the prewar period. They have left a great musical treasure for us all.

You can view the whole Moerbisch performance of Graefin Maritza online here. But if you want English subtitles you will have to buy the DVD. The words are of course in German, but the music is international. Go to the 48 minute mark for the marvellous Varasdin song ("Komm mit nach Varasdin"). The words of the song are here

There is a nice picture below of the very expressive Dagmar Schellenberger in her role as the Graefin at Moerbisch in 2004. She is both a most accomplished soprano and a superb actress. 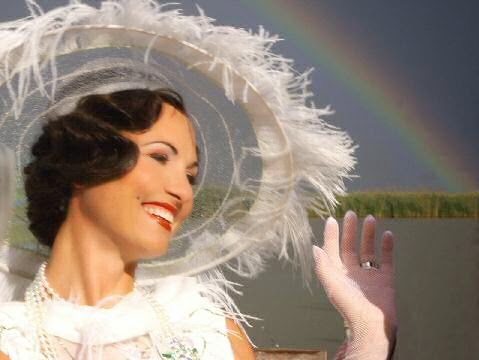 I am a great fan of Schellenberger. I have even put up a fan site for her. She is a fabulous and expressive woman as well as a great Prussian soprano. And in operetta it helps if the ladies are good-looking. And Schellenberger is. We actually see more of her in Die lustige Witwe but IMHO she looks best when she wears Tracht -- towards the end of this show. The big skirts of country Austria do seem to be flattering generally.