You can see that she is just about as Aboriginal as I am. And my ancestry is entirely British. She’s just a far Leftist approval-seeker. But she is in the right party. The Australian Greens are far-Leftists. 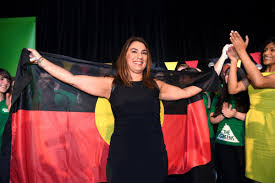 The question remains whether she is approprite to sit in our parliament. Before sitting, all members have to make the oath of allegiance. It is a constitutional requirement. It reads:

“I do swear that I will be faithful and bear true allegiance to Her Majesty Queen Elizabeth II’ Her heirs and successors according to law. SO HELP ME GOD!”

If she doesn’t like Australia, she surely would not like swearing allegiance to our Head of State. But she must have taken the oath to be seated. So she is a fraud and an impostor

An incoming Greens senator has revealed she has never sung the national anthem and found the Australian flag to be offensive.

Lidia Thorpe will next week become the first-ever indigenous senator for Victoria when she swears an oath of allegiance to the Queen.

The 47-year-old activist and grandmother from Melbourne, who is replacing former Greens leader Richard Di Natale in federal Parliament, has declared she doesn’t associate herself with Advance Australia Fair.

‘I’ve never participated in the Australian anthem,’ she told the ABC’s 7.30 program.

Ms Thorpe has also expressed misgivings about the Australian flag, especially when it is displayed on Australia Day, January 26. ‘Yeah, and I feel that pain in terms of, I know what it’s like to feel offended,’ she said.

‘When I see Australian flags all over the media on the 26th of January and drinking and partying, when that day represents so much loss to our people. ‘I feel that pain too.’

Like some left-wing indigenous activists, Ms Thorpe regards the 1788 arrival of the British First Fleet as an ‘Invasion Day’ and the start of land being dispossessed.

Last year, she told UK-born actress Miriam Margoyles’ Almost Australian documentary she saw herself as an indigenous woman and not an Australian.

‘I don’t identify as being Australian. It’s a concept that’s been imposed on our people since we’re invaded,’ she told the program, which aired on the ABC in May. ‘The colonisers came and set up the colony which they now call Australia. ‘Mass genocide occurred.’

When she takes an oath in the Senate, Ms Thorpe will become just the eighth indigenous member of federal Parliament since Federation in 1901.

Ms Thorpe, who is the granddaughter and great-granddaughter of female indigenous activists, said she was more than just a campaigner for Aboriginal rights.

‘I know that people see me as this radical angry black woman and, yes, I can be that, but I am a nice person too and I’m a mum, I’m a grandma, I’m a sister, auntie,’ she said.

Ms Thorpe, who became a mother at age 17 and lived in public housing, will be among five indigenous MPs in Canberra, alongside Labor’s Linda Burney, Malarndirri McCarthy and Pat Dodson, and Liberal Indigenous Australians Minister Ken Wyatt, who in 2010 became the first Aboriginal member of the House of Representatives.

Neville Bonner made history in 1971 as Australia’s first indigenous senator when he filled a casual Liberal Party vacancy in Queensland.

Aden Ridgeway in 1998 became the next indigenous senator with the Australian Democrats in New South Wales.

Olympic hockey gold medallist Nova Peris in 2013 became the first indigenous senator for the Northern Territory after Labor prime minister Julia Gillard insisted she replace Trish Crossin at the top of the party ticket at that year’s election.

Ms Thorpe in November 2017 became the first Aboriginal woman elected to the Victorian Parliament by winning the Melbourne inner-north seat of Northcote.

Ms Thorpe lost her seat a year after that by-election victory, sparked by the the death of Labor minister Fiona Richardson.

That led to her in June defeating Queens’s Counsel barrister Julian Burnside for Greens preselection to replace Senator Di Natale in Parliament.