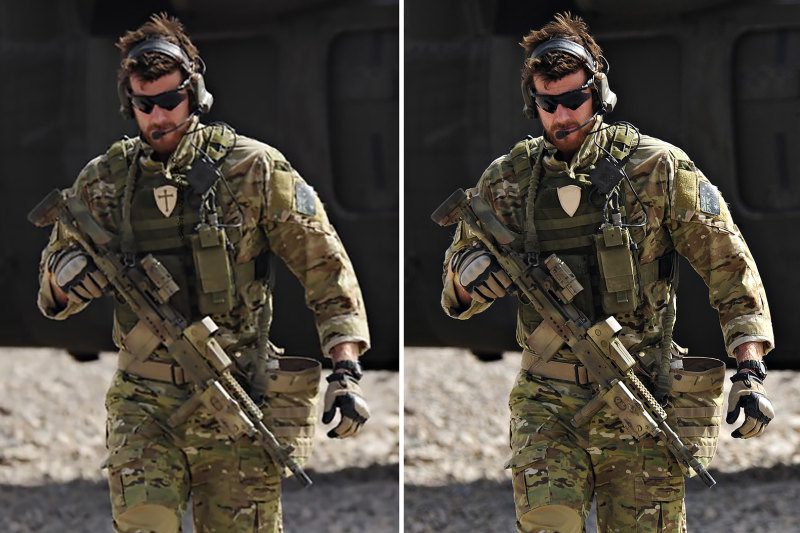 <i>Men in warzones often embellish ther kit and Ben was not only one to do so. The crusaders were a powerful military force who defeated Muslim armies so the symbol is reasonable</i>
Former special forces soldier Ben Roberts-Smith displayed a contentious Crusader’s cross on his uniform while on duty in Afghanistan, with the symbol later digitally removed by the Department of Defence in a widely distributed photo of the decorated war veteran.
The photo released by Defence at some time near January 2011 shows Mr Roberts-Smith wearing a blank patch on the front of his uniform after exiting a helicopter.
But The Sydney Morning Herald and The Age has obtained the original photo, which was taken on April 6, 2010, revealing Mr Roberts-Smith was in fact bearing the Crusader’s Cross.
Australia Defence Association executive director Neil James said displaying the symbol was “wrong morally” and “counterproductive”.
The symbol dates back to the 11th and 12th centuries when the Crusaders captured parts of the Middle East from Muslim control. Many Muslims find the cross to be offensive, particularly when displayed by western soldiers in their country.
A spokesperson for Defence said it “does not condone or permit the use, display or adoption of symbols, emblems and iconography that are at odds with Defence values”.
Mr James said wearing a Crusader’s cross was “simply unprofessional” and part of the poor cultural standards that were unearthed by the long-running Brereton inquiry.
“We know from the Brereton report that a lot of the things that were allegedly done were due to unprofessional actions,” he said.
“You’re fighting people motivated by Islamist extremism, and you’re in effect kicking an own goal by providing them with propaganda. That’s exceptionally dumb to do in a counter-insurgency war.”
Displaying symbols such as the Crusader’s cross or Spartan-style insignia was widespread within the ADF at the time the photo was taken. In 2018, then-Chief of Army General Angus Campbell issued a directive to commanders that they should stamp out all instances of “death symbology and iconography”.
Under Defence policy, the department can make minor alterations to images for reasons related to operational security or privacy concerns. According to Defence, it has been unable to identify at what stage in the approval process the image was modified and whether this occurred in Afghanistan or Australia.
Australian Federation of Islamic Councils executive member Mohammed Berjauoi said Western forces should not invoke the Crusades when conducting military activity in the Middle East.
“Whoever uses that symbol provokes Muslims and increases anger against the West. It is the wrong thing to do,” he said.
“It undermines the Australian policy, which calls for peace in the world. We know it’s not the policy of the Australian government – but one mistake like this upsets a lot of people and makes them really think about the role of the Australian government in the Middle East.”
The altered image of the former SAS corporal was among several that were publicly released to coincide with the presentation of the Victoria Cross to Mr Roberts-Smith in 2011 and was published on the Defence image gallery. It has been published by multiple media outlets over the past decade, including News Corp papers and The Sydney Morning Herald and The Age, as well as the Australian War Memorial.
A spokesperson for the AWM said the image with the blank patch was “supplied by the Department of Defence to the Australian War Memorial and is the only version held by the Australian War Memorial”.
“The photo was available to view on the Memorial webpage soon after the accession date in February 2011 and remained online until it was removed on 01/04/2021 when its status was changed as part of an internal collection management process,” the AWM spokesperson said.
The Australian Federal Police is currently investigating Mr Roberts-Smith over allegations he committed war crimes and intimidated war crimes witnesses. Mr Roberts-Smith has denied all wrongdoing and launched a defamation action against The Age and The Sydney Morning Herald over reports that he allegedly committed murder on deployments to Afghanistan.
The Brereton inquiry, which last year found credible evidence of 39 unlawful killings of Afghan civilians or prisoners by Australian soldiers who were not named, raised the alarm about a “warrior culture” within Australia’s special forces and “the clique of non-commissioned officers who propagated it”.
“Special Forces operators should pride themselves on being model professional soldiers, not on being ‘warrior heroes’,” Justice Paul Brereton said.
https://www.smh.com.au/politics/federal/wrong-morally-official-photo-of-ben-roberts-smith-was-altered-to-hide-crusader-s-cross-20210726-p58cvu.html
By JR on Wednesday, August 04, 2021