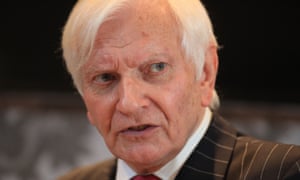 It largely ruined his life.  Not only did he lose his job, home and reputation due to false accusations of paedophilia and murder, but the former Tory MP believes the authorities tried to tear apart his family. He was also left penniless. So this award is a minimum.

He is certainly right to demand the resignation of dear Cressida.  She was in charge of the operation that resulted in the police killing of an entirely innocent Brazilian electrician.  Anybody else would have been demoted over that but she was instead put in charge of the entire London police.  Why? She is an open Lesbian.  That's a huge tick in politically correct Britain.  Will she be demoted now that she is responsible for two great miscarriages of justice?  Probably not

Harvey Proctor, the former Tory MP, has accepted a payout of almost £1 million from the Scotland Yard over its disastrous handling of Operation Midland, but has still demanded that the Commissioner, Dame Cressida Dick resigns.

The 72-year-old, who was investigated by the force for more than a year after being falsely accused of child murder by the fantasist, Carl Beech will receive £500,000 damages and £400,000 in legal costs.

It is believed to be the biggest ever payout by a police force over negligent behaviour which did not result in wrongful imprisonment and marks a humiliating end to the debacle for the Met.

But despite accepting the payout, Mr Proctor has refused to go quietly and has issued a withering statement blasting the Met over its numerous failings.

In the statement, Mr Proctor, who lost his home and his job as a result of the police investigation, said had refused to sign any non disclosure agreements as part of the deal and remained free to criticise Scotland Yard.

He said: "Cressida Dick failed abjectly in her duty and should resign, while Steve Rodhouse is a very stupid man who should not be the deputy in charge of the National Crime Agency."

Mr Proctor launched legal action against the Met and had been willing to take the case to trial at the High Court, where if he had won, he could have expected an even larger payout.

But he said: "I am heartily sick of these police and their mealy-mouthed apologies to me and I did not want to take a fortune from public funds. Just enough to put my innocence beyond doubt, and to warn the police not to make this same mistake with other people."

Operation Midland was launched in 2014 after Beech told detectives he had been raped and abused by politicians and high profile figures during the 1970s.

Scotland Yard declared the allegations as credible and true and launched a multi-million pound investigation which saw the homes of Mr Proctor, D-day veteran Lord Bramall and the late Lord Brittan raided and searched.

After traducing the reputations of number of highly respected figures, the investigation was eventually closed down without a single arrest being made.

Beech, who is himself a convicted paedophile, was eventually charged with perverting the course of justice and was jailed for 18-years in July.

Earlier this month, Mr Proctor reported five former Met officers to Northumbria Police in a bid to spark a fresh criminal inquiry into the investigation.

Among the allegations he has made is that the police misled a district judge when applying for the search warrants to raid the homes of the suspects.

He is still waiting to hear if a criminal investigation will be launched. A spokesman for Scotland Yard said: "The MPS is assessing the complaint."

All of the officers involved in Operation Midland have been cleared of any wrongdoing by the Independent Office for Police Conduct (IOPC).