The psychology of hate

Sandro Galea has come along way since his origins in Malta.  He has authored over 800 academic publications and is now Dean of the School of Public Health at Boston university, a large private university with a strong research orientation.  He is a registered do-gooder, having spent some time in his youth "helping" the benighted people of New Guinea.

Below is a press release announcing his talk on hate.  I will have some comments at the foot of it.

Global experts to examine hate as a public health issue
Professor Sandro Galea, a global expert on public health, talks about the under-represented topic of hate as a contributing factor in health and health equity.

The Australian Prevention Partnership Centre (the Prevention Centre) hosts world-leader in research and discourse on public health, Professor Sandro Galea from Boston University. Professor Galea will lead the conversation on hate as a public health issue at an event on 30 September 2019.

His research shows that hate is a contributor to poor physical and mental health at both the level of the individual and then at societal level.

“Hate such as the kind we witnessed in the aftermath of the Charlottesville violence is like a disease, spreading among populations and undermining health in a manner eerily similar to that of a pathogen,” said Professor Galea.

“When a society is infected by hate, it is not hard to see how it can affect our bodies and minds. Being hated is stressful. It makes a person fear for her safety, resent her lack of respect, and worry about what the future holds for herself and her family. People who feel hated are more likely to experience major depression, and the fruits of hate – prejudice, discrimination, segregation, and interpersonal antagonism – sicken and kill Americans every day,” he said.

“Chronic disease, mental illness and drug use,” said Professor Galea. “None of these can be successfully addressed without discussing the injustice and racism that may be at their source. No matter how great our hospitals or advanced our technology, health is limited by the world in which people live.”

“The first step is to change the way we talk about health at a grassroots as well as at a policy level. Seeing health for what it is – a result of factors embedded in everyday life – is just as important as investing in a new hospital or MRI machine.”

So what a fine person Professor Galea is -- talking about what is undoubtedly an important issue.  As I often put up on my blogs news articles about hate, I was greatly interested to hear of him.  I looked forward to seeing his research on the subject. So I checked his list of publications on ResearhGate but, lo and behold, I could not find any!  There were articles in the popular press which consisted largely of bloviation and virtue signalling but that was it. He does do proper scientific articles but not on hate.

Nonetheless, I do agree with him that hate is toxic.  But I also think he is missing the elephant in the room.  And what a big elephant it is!  A veritable mammoth.  We see a virtual  torrent of hate being poured out constantly at Donald J. Trump by the Left. The disapproval of Third World immigration coming from the Right is very pale stuff compared with the hate that seems to come from every pore of the Left.  Hate is what they do these days. They seem to hate just about everything.
And it seems clear that their chronic hate has completely deranged the Left, if the recent Democrat primary debates are anything to go by.  Most of the policy proposals put forward there seem completely out of touch with reality.  And loss of reality contact is the prime symptom of psychosis.

The hate motivation of the Left is all too obvious to need much research but I am sure Prof. Galea could find something to research there if he got serious about the topic.

I give below a moderate and balanced comment on the current political scene from a prominent Leftist commentator.  The Right would have a hard job of matching it.  But perhaps Prof. Galea could find an example of a prominent conservative being so eloquent: 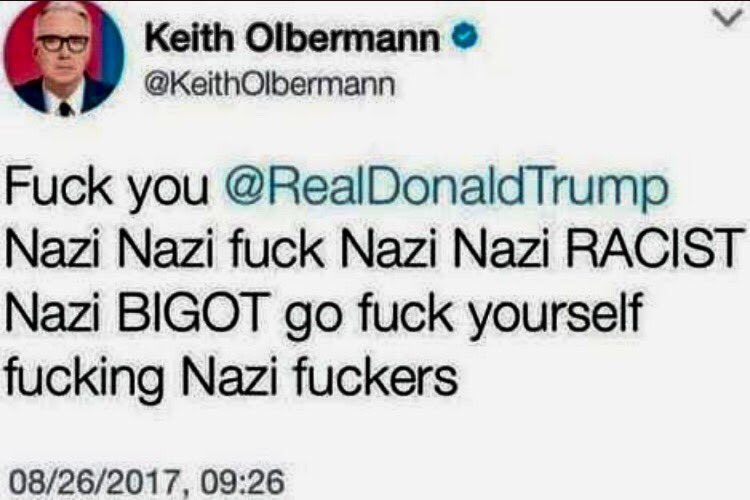 The way the Left describe as hate even the mildest expression of disapproval coming from conservatives is an example of projection that Freud would celebrate.  The Left assume that others have hearts as black as theirs