I suppose it is regrettable in some ways but sexual attraction is well rooted in our evolutionary past -- and it is unrelenting.

And the reality is that both sexes are very physically oriented.  Men like a woman to have some approximation to an hourglass figure and women want a man who is tall and well-built.  A man of 6' and around 200lb just has to have a nice smile for something like 90% of women to find him attractive. A man only 5' tall  will only be attractive to about 1% of women, most of them fatties.

So our hero below is rightly aggrieved.  But he is fishing in the wrong pool.  He evidently wants an attractive woman. He should be realistic and look for a fatty


The bagel shop customer who left a larger-than-life impression after he went on a rant about being vertically challenged claims he is the 'Martin Luther King' of short people.

In a rambling interview with DailyMail.com, Morgan said that he felt pushed to breaking point by discrimination against short people.

The five foot tall 45-year-old, of Long Island, even said he saw himself as a 'prophet' and 'modern day Martin Luther King' for people of his height as he called for equality for smaller men.

'I got to the point where I'd had enough,' he added. 'The girls hate me, they don't like me, that's fine,' he added. Now I have a mission. 'I'm not stopping and the world is going to hear me. I want equality for everybody. ' 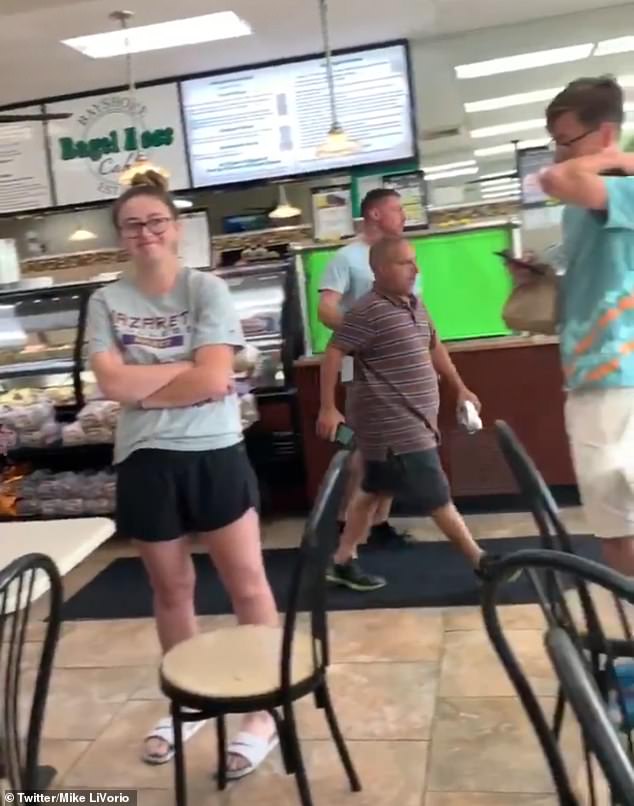 He does look rather ridiculous amid much taller people

But in the same breath, the divorced cleaning company owner, who has no children, said he resented all women, branding them 'gold diggers' because they kept dumping him 'because of his height.'

He said: 'I'm sick of getting constantly lied to and used on dates. And then they dump me. They tell me I'm too short,' he explained. 'They don't have a job, or a job as good as mine. They don't have a car. They are more overweight... and they are judging ME?

'Whatever happened to the love of the 60s?' he asked. 'When people loved each other for themselves?'

Morgan, who got married in 2007 before getting divorced five years later, clarified that he was 'tired of the immaturity.' And while he was seen in footage being the aggressor, he asserts that he just wants 'justice.'

'I'm just not tolerating this any more,' Morgan declared. 'Some of those girls found it funny. That's why I have resentment towards women. I find them all to be stupid, gold digging liars.'

But he claims that since video of him screaming and ranting about how the world treated 5ft-tall men, that women have been unfathomably throwing themselves at him.

The incident began yesterday at the Bay Shore bagel when Morgan claims the girl behind the counter struggled to understand his order.

'The third time I asked, she smirked with her friends,' he shared. 'She was laughing and talking with her friends, putting her hand over her mouth and laughing, like girls do when they reject me on a date.

Morgan has a history of confrontations, as seen on his YouTube page which is inundated with clips of him getting in fights with gas station employees and mothers. Some videos even contain racist language. Others do show him playing with a bird and fishing.

In one video, Morgan storms into a 7/11 and has a argument with a Pakistani employee who he claims asked how tall he was. He proceeds to scream at the man about how he is from a 'third world country.'

Morgan attempted to get the employee detained by police, but officers refused to file harassment charges.

Reyes told the DailyMail.com that she and her friend - 19-year-old Olivia Bradley - were waiting in line for their breakfast when the man started mouthing off in front of them to staff.

'He just seemed a little agitated and as soon as the woman turned her head, he started going off,' Reyes said. 'No one provoked him.'

The brief clip shows a woman asking the man why it is OK to 'degrade women.'  The man retorted: 'Why is it OK for women to say "Oh you are 5ft' on dating sites. "You should be dead. That's OK!'

As other patrons point out that no one has said that inside the establishment, the Napoleon-esque man asserts that 'women in general' make the distinction.

The vertically challenged patron then shouted: 'Everywhere I go I get the same fucking smirk with the biting lip.'

A man in the store, who is twice the angry customer's size, tries to get him to calm down.

'Shut your mouth,' he stated. 'You're not god, or my father or my boss.' The little man tells the larger man he isn't scared of him and chest bumps him in an attempt to intimidate him.

But as he continues boasting about his fighting abilities, another man comes and slams him to the ground.

Additional clips show the man storming out of the store as employees try to hand him his bagel.

The 18-year-old also said that the man who tackled the angry customer, immediately letting him get up and walk away.