What are "hoddox"?  I have encountered hoddox only once. It was on my first trip to South Africa in 1979. I was in the Hillbrow area of Johannesburg, then a rather "vibrant" (in a good way.  I don't like some vibrations) area.  It was a safe area to walk around in then, unlike in the "rainbow" South Africa of today.

Anyway, I wanted some food so walked into a small cafe and asked the proprietor what he was selling.  He listed a number of things, one of which was "hoddox".  It sounded interesting so I  ordered it.  It was a hot dog.  The proprietor was Greek -- and a Greek version of a South African accent had foxed me.

I very rarely eat hot dogs because I don't like frankfurts, which are their usual filling.  Although there is something about franks that I don't like, I have never been quite able to pin down what it is.  I think I may have found out, however.  I think the following information from a food chemist might put a lot of people off:

"One thing about hot dogs, they're in a category called emulsified sausages and they're a bit more complex than, say, your typical sausage. In summer sausage, meat and fat are ground up into small chunks, and them mixed with spices. You can still see those chunks and tell the meat apart from the fat though. In an emulsified sausage like hot dogs, the meat and fat are ground into much tinier chunks, until it forms a uniform paste. The paste then mixed in powerful, high speed mixers together with spices, additives, water, and air. If regular sausage is like pesto, emulsified sausage is like vinaigrette. There's a lot of things going on in there that you just can't see without a microscope"

I am very keen on sausages generally so it must just be the texture of franks that I dislike. A jocular name for sausages is "mystery bags".  I think the mystery is most pronounced with franks.

I acquired the information above in pursuit of something I encountered on one of my trips to L.A.  I was living in a cheap motel and had the radio on a fair bit.  I mostly had a station called KFWB on, as it was an all-news station then and I wanted to keep abreast of what was going on in America at that time.

"A Livonia, Michigan meat-packing company called Hygrade Food Products won a competition in 1959 to be the exclusive supplier of hot dogs to the Detroit Tigers and Tiger Stadium. Hygrade Food Products launched a contest to its employees in order to come up with the best brand name for their Detroit Tigers stadium hot dogs. Mary Ann Kurk, one of Hygrade Food Products sales people at the time, won the contest with the name "Ball Park Franks". She won a leather living room chair and a cash prize of $25 (equivalent to $203 in 2015). It was from this venue that Ball Park Franks gained popularity and became known in American pop-culture. Sara Lee acquired Hygrades from Hanson Industries in 1989"

And the great slogan advertising Ballpark franks was:

"They plump when you cook em".

That seemed very strange to me.  It sounded like an apology for their franks being small.  It seemed a strange thing to focus your advertising on.  And, perhaps because that seemed odd to me, it has remained in my memory to a most unfortunate degree.  Often, when I see sausages of any kind, that stupid slogan runs through my head.  My mind has been infected by a virus that I most deplore and cannot get rid of.  I guess I must regard that  as just one of the many injuries we suffer as we slide down the razorblade of life.  (Hats off to Tom Lehrer). 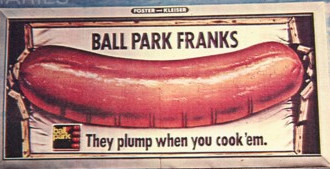