I hesitated for some time before buying the recording  of Giuditta.  With music by Lehar and a performance from Moerbisch (2003) how could I go wrong?  I just did not like the synopsis.  The ending was undoubtedly romantic but it was not happy!  That is usually not allowed in operetta!  No wonder Harald Serafin (for once) did not cast himself in any of the parts.

I cannot for the life of me see why the librettists did not change the ending to a happy one.  It would have been very easy to do.  If I were Intendant, I would.  As it is, the ending was more like grand opera than operetta.   But a lot of people like that, I suppose. I am not the first to note the similarity with "Carmen".  It was Lehar's last work, appearing in 1934.

It was however rather redeemed for me by having Montazeri as the tenor.  And it was amusing to see little Julia Bauer in a "second banana" role again.  She did well.

"Giuditta" was played by Natalia Ushakova, a good-looking green-eyed Russian soprano born in Uzbekistan in 1979.  She debuted in opera in 1999 and has had a rather meteoric career since. She is now an Austrian citizen.  She would have been 24 in this show.  You can hear the power of her voice best here, in a clip from "Tosca".  And here you can hear her giving an impeccable rendition of Puccini's wonderful O mio babbino caro. 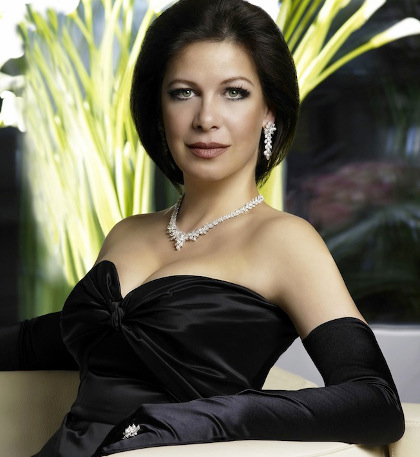 Ushakova in a studio shot.  With good looks and a great voice how could she go wrong?

But "Giuditta" was just too neurotic a lady for me, something that Ushakova played extremely well. "Giuditta" had no resilience at all.  But that was part of the role.  She was supposedly of Spanish and North African ancestry: A Mediterranean person.

And the gap between the people of North-Western Europe and the Mediterraneans is well-known-- emotional Southerners and cool Northerners. And both groups are aware of it.  Italians tend to regard Germans as very alarming people, for instance.

I am of the Northwestern Volk.  And it is an easily definable Volk.  It is simply people who speak Germanic languages and trace their ultimate ancestry to the shores of the Baltic --  the Germanic people -- whether Germans, English, Scandinavians or the German lands more broadly defined (Swiss, Flanders etc).  We are all pretty similar in our restrained emotionality.

But in the South emotions run riot.  And Giuditta was certainly a case of that.  Women routinely choose military men as partners because they are real men.  But they all "wait" for their men while their men are on deployment. Giuditta had no conception of that.

Anyway the Giuditta lady just seemed nutty to me.  Compare that with my favourite operetta  -- Wiener Blut -- where Hallstein is as cool as a cucumber throughout.  A great difference but still lots of laughs.  There weren't many in Giuditta

I use the German word Volk because it is right for what I mean.  English has no equivalent word.  It is NOT "Right wing".  The old Communist East Germany put VEB (Volkseigener Betrieb) on all its products.  "Right-wing" Communists?

The clip below is of Ushakova singing her Giuditta theme song (Meine Lippen, sie kuessen so heiss).  Rather low rez, I am afraid