Despite the caution of the CERN Director General

Long-anticipated results of the CLOUD experiment at CERN in Geneva appear in tomorrow’s issue of the journal Nature (25 August). The Director General of CERN stirred controversy last month, by saying that the CLOUD team’s report should be politically correct about climate change (see my 17 July post below). The implication was that they should on no account endorse the Danish heresy – Henrik Svensmark’s hypothesis that most of the global warming of the 20th Century can be explained by the reduction in cosmic rays due to livelier solar activity, resulting in less low cloud cover and warmer surface temperatures.

Willy-nilly the results speak for themselves, and it’s no wonder the Director General was fretful.

Jasper Kirkby of CERN and his 62 co-authors, from 17 institutes in Europe and the USA, announce big effects of pions from an accelerator, which simulate the cosmic rays and ionize the air in the experimental chamber. The pions strongly promote the formation of clusters of sulphuric acid and water molecules – aerosols of the kind that may grow into cloud condensation nuclei on which cloud droplets form. What’s more, there’s a very important clarification of the chemistry involved.

A breach of etiquette

My interest in CLOUD goes back nearly 14 years, to a lecture I gave at CERN about Svensmark’s discovery of the link between cosmic rays and cloudiness. It piqued Kirkby’s curiosity, and both Svensmark and I were among those who helped him to prepare his proposal for CLOUD.

By an unpleasant irony, the only Svensmark contribution acknowledged in theNature report is the 1997 paper (Svensmark and Friis-Christensen) on which I based my CERN lecture. There’s no mention of the successful experiments in ion chemistry and molecular cluster formation by the Danish team in Copenhagen, Boulby and latterly in Aarhus where they beat CLOUD to the first results obtained using a particle beam (instead of gamma rays and natural cosmic rays) to ionize the air in the experimental chamber – see here

What will historians of science make of this breach of scientific etiquette? That Kirkby was cross because Svensmark, losing patience with the long delay in getting approval and funding for CLOUD, took matters into his own hands? Or because Svensmark’s candour about cosmic rays casting doubt on catastrophic man-made global warming frightened the national funding agencies? Or was Kirkby simply doing his best (despite the results) to obey his Director General by slighting all things Danish?

Personal rivalries aside, the important question is what the new CLOUD paper means for the Svensmark hypothesis. Pick your way through the cautious prose and you’ll find this:

“Ion-induced nucleation [cosmic ray action] will manifest itself as a steady production of new particles [molecular clusters] that is difficult to isolate in atmospheric observations because of other sources of variability but is nevertheless taking place and could be quite large when averaged globally over the troposphere [the lower atmosphere].”

It’s so transparently favourable to what the Danes have said all along that I’m surprised the warmists’ house magazine Nature is able to publish it, even omitting the telltale graph. 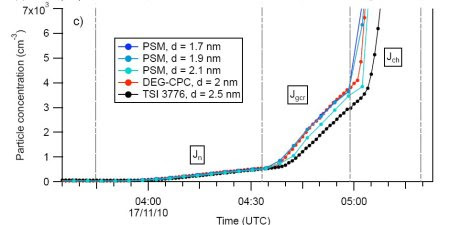 A graph they'd prefer you not to notice. Tucked away near the end of online supplementary material, and omitted from the printed CLOUD paper in Nature, it clearly shows how cosmic rays promote the formation of clusters of molecules (“particles”) that in the real atmosphere can grow and seed clouds. In an early-morning experimental run at CERN, starting at 03.45, ultraviolet light began making sulphuric acid molecules in the chamber, while a strong electric field cleansed the air of ions. It also tended to remove molecular clusters made in the neutral environment (n) but some of these accumulated at a low rate. As soon as the electric field was switched off at 04.33, natural cosmic rays (gcr) raining down through the roof of the experimental hall in Geneva helped to build clusters at a higher rate.

How do we know they were contributing? Because when, at 04.58, CLOUD simulated stronger cosmic rays with a beam of charged pion particles (ch) from the accelerator, the rate of cluster production became faster still. The various colours are for clusters of different diameters (in nanometres) as recorded by various instruments. The largest (black) took longer to grow than the smallest (blue). This is Fig. S2c from supplementary online material for J. Kirkby et al., Nature, 476, 429-433, © Nature 2011

Added to the already favourable Danish experimental findings, the more detailed CERN result is excellent. Thanks a million, Jasper.