Mr. and Mrs. Zero visited Westminster Abbey on their trip to London this week (5/24), and signed the guestbook. Mrs. Zero just signed her name. Mr. Zero wrote a message - "It is a great privilege to commemorate our common heritage, and common sacrifice" - then signed and dated it: 24 May 2008. 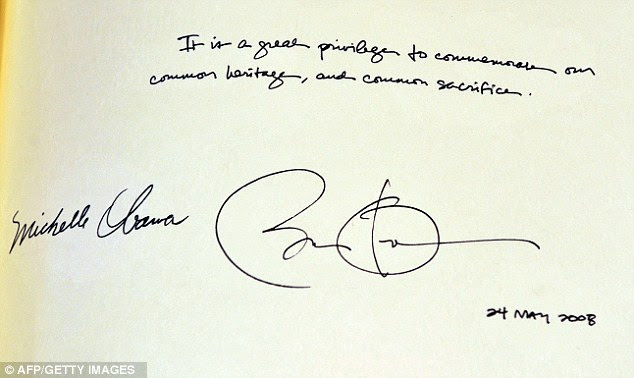 Yes, 2008. You can see for yourself. There's no way around it. This is a teachable moment that goes far beyond pointing out what massive ridicule would have befallen George Bush or Sarah Palin had they made such a stupid mistake, yet is ignored and brushed aside by the OPM - Obama Propaganda Media - and the worshippers of the Cult of Zero..

There are two lessons to be taught and learned, one about Zero himself, the other about his followers.

Regarding the first, it is now no longer deniable that the current occupant of the White House is not very bright. There have been too many boneheaded stupidities - "57 states," "Austrian" is a language, on and on. Not knowing what year it is - 2008??? - clinches it.

Yet dumb gaffes only hint at the problem. The stunning ignorance he displayed in demanding Israel return to its 1967 "borders" - he didn't even know they weren't borders but cease-fire lines - is far scarier.

There is simply no evidence that this man is really smart or has any real grasp of history, geography, and the world as it is. It's a myth carefully constructed and maintained by the lib media that he's oh-so-brilliant - which is why he won't permit his college transcripts to be released (Occidental, Harvard, Columbia) because they'd show such mediocre grades.

What the Westminster Abbey guestbook gaffe provides is a marvelous opportunity for any Pub pres-aspirant with the moxie to exploit it.

It is a fabulous visual which anyone can instantly see and laugh at. The aspirant could hold up the photo of it in a campaign television ad, point the goof out and note, "We have a president who does not know what year it is," then ask the viewer:

"Mr. Obama is very skilled at reading a carefully scripted speech off a teleprompter. But his reputation for intelligence may be a myth. Is, for example, the reason he will not allow his college transcripts from Occidental, Columbia, and Harvard because they show him to be a C student with poor grades? My grades from college are available for all to see. I challenge Mr. Obama to do the same." Such an ad by, say, Herman Cain, would go YouTube viral in a New York second.

Thus the first lesson of "24 May 2008" - we need a Republican presidential candidate willing to ridicule Zero.

Every day since January 20, 2009 has brought fresh evidence of Zero's malfeasance, mendacity, and mediocrity. The evidence is by now as massive as Mount Everest, and keeps mounting. The Chicago thug corruption is blatant for all to see - the ZeroCare Waivergate scandal being just one example. There are dozens of others.

As the economy continues to go south, as tens of millions of people remain unemployed, with all of us facing record inflation - especially with food and energy prices - while enduring ever more rules and government intrusion into our lives, the numbers of true believers in the Cult of Zero will steadily dwindle.

And thus we can predict the exact date of The Great Disappointment to be experienced by members of the cult: November 6, 2012.

The prediction is conditional. It is entirely possible that the Republican candidate will be a nebbish afraid to go for Zero's jugular, or allow the Dems to get away with the gigantic nation-wide voter fraud they are planning.