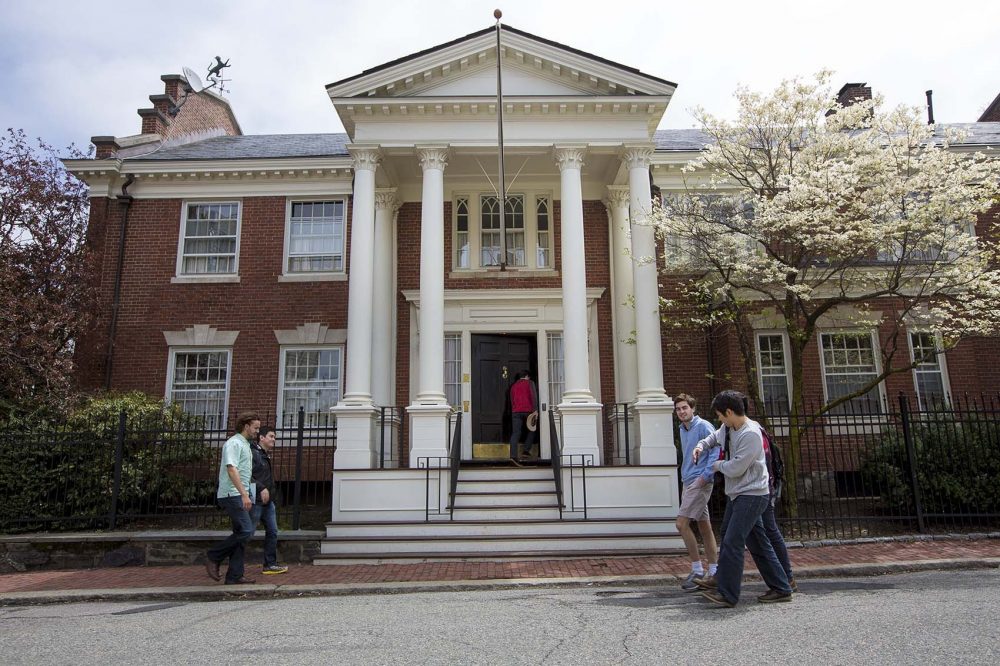 The Fly Club, one of the exclusive final clubs at Harvard University

This goes back to 2017, when the university authorities were suffering heartburn over the university's long tradition of all-male "final clubs", which were claimed to be misogynist

The hypocrisy and sheer anti-male hostility in this is mind boggling. Feminists worldwide campaign for safe spaces for women.  Why must there be no safe spaces for men?  What is a "safe space" for women is apparently a "gender-discriminatory organization" for men.

Why the university has caved and removed its restrictions is a bit obscure.  The rationale seems to be that there are now no longer two sexes and that the male/female division is wrong.  So a ban on one sex is wrong


In a twist of irony that could happen only to the Left, Harvard College has rescinded its sanctions on single-sex campus organizations -- which it implemented to promote inclusivity -- after a recent Supreme Court ruling redefining “sex” to include “gender identity” rendered the sanctions discriminatory.

Two weeks ago, the Supreme Court decided that protections against sex discrimination of the 1964 Civil Rights Act also protected LGBTQ employees from workplace discrimination on the basis of their sexual orientation. The ruling, in which the majority opinion was authored by Trump appointee Justice Neil Gorsuch, stunned conservatives who asserted that equating sex with sexual orientation would jeopardize single-sex environments like women’s sports and shelters.

But while the full fallout remains to be seen, the ruling has had the opposite affect at Harvard, which was forced to reinstate single-sex clubs.

According to the Harvard Crimson, the college announced a set of sanctions in 2016 which applied to members of certain clubs and single-sex Greek organizations. These sanctions prevented students in those groups from holding student-group leadership positions, varsity athletic team captaincies, and college endorsement for certain prestigious fellowships.

“Harvard College is committed to ensuring an inclusive student social life on our campus,” wrote Associate Dean of Student Engagement Alexander R. Miller in a 2018 email. “While we understand the cultural significance of these groups, our policy clearly states that we do not recognize single gender social organizations or fraternities and sororities, and therefore they are not recognized by Harvard College.”

As a result, Greek houses affiliated with national organizations were forced to disaffiliate, turning into new, gender-neutral social clubs instead: Kappa Kappa Gamma became the “Fleur-de-Lis,” Delta Gamma became the “Kali Praxi,” Alpha Epsilon Pi became “The Aleph,” and Kappa Sigma the “K.S. Club,” to name a few. The groups saw recruitment interest drop by half following the sanctions, which received intense scrutiny and pushback from students.

The new rule caused the national organizations of the former sororities and fraternities to bring two lawsuits against Harvard, ironically asserting that the college’s policy of recognizing only co-ed organizations is discriminatory, coercive, and unconstitutional.

“Harvard’s discriminatory policy has done enough harm already,” national Panhellenic and Interfraternity Council leaders wrote in a statement. “It has decimated Harvard women’s groups and created a culture of fear and distrust. Harvard should stop discriminating against its students on the basis of sex, immediately.”

But upon the Supreme Court’s ruling in Bostock v. Clayton County in June, Harvard announced they would drop the sanctions, allowing single-sex clubs on campus once again. According to an email from Harvard President Lawrence S. Bacow, the court’s reasoning would impact the college’s policy and result in a legal loss for the college.

“In essence, [United States District Court Judge Nathaniel M. Gorton] accepted the plaintiffs’ legal theory that the policy, although adopted to counteract discrimination based on sex, is itself an instance of discrimination based on sex,” Bacow wrote. “It now seems clear that Judge Gorton would ultimately grant judgment in the plaintiffs’ favor in the pending lawsuit and that Harvard would be legally barred from further enforcing the policy.”

Sororities and fraternities were quick to cheer the news.

“This is a huge victory for those who choose to stand up to power for the simple right to belong to a single-sex leadership organization without worry of being sanctioned for that choice,” said Gail Owen, president of Kappa Kappa Gamma. “In a much broader sense, this means that women can be free to join with other women who share in Kappa’s mission to learn, grow and inspire positive change without the threat of sanctions for choosing to do so.”

“We are so happy that Harvard has recognized something that we have long known,” the sorority said in an Instagram post. “Female voices have a right to be heard and deserve a place on our campus, and we cannot express how much today’s decision means to us.”

Whether Harvard students realize it or not, their fight to reinstate the college’s single-sex organizations admits that there are inherent differences between men and women and that clubs have the right to discriminate in who they welcome into their organization. For a notoriously liberal campus, that sounds pretty conservative.