The normal or Gaussian distribution is a mathematical construct which shows most instances of anything as being clustered around the mean (average).   A remarkable thing about it, however, is that most natural phenomena tend to scatter in that pattern.  The normal distribution really is normal!

A normal distribution is however rather "fat".  It covers a fair range.  There is a pic of one below 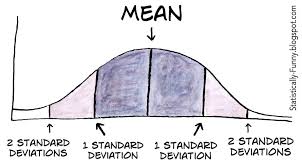 And male IQ follows that pattern fairly closely.  The female IQ does not quite follow that pattern, however.  It is leptokurtic, meaning narrower.  It is not so spread out. See the example below: 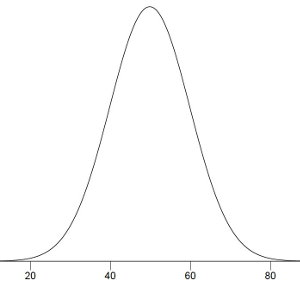 So we don't have to explain the male distribution.  It is normal.  What we have to explain is why the female distribution is narrower. And that seems fairly easy to me.  No algebra is required!  Men are very uniform in what they like in a woman.  A lot of it is physical: Long legs, a slim figure, some bosom, long hair etc. If a lady with those characteristics is kind to a man he will be in love! And high IQ in a woman is not a big priority for men. It may even be a negative for some.

So women have evolved to maximize the fairly narrow range of things that men like, with other characteristics falling by the wayside -- including IQ.  Men have made women less varied.  Won't the feminists like to hear that!

So how does male selectivity explain the low frequency of really dumb women?  That is pretty straightforward.  Men require some minimal level of IQ in order to find a woman attractive.  So women below that level will not mate and not reproduce.  Men have also set the lower bound of female intelligence

So how do we account for the fact that dumb men seem to proliferate without restriction?  Should not the general female preference for high IQ cause such men to die out? I dealt with that yesterday but I think I should repeat my remarks here for the sake of convenience.

In summary, I think we have to conclude that quite dumb men can still be of some use to some women. How?  In all mate selection, what you will overlook as well as what you get is important. And some women will apparently overlook low IQ.  I suspect that it is a simple case of similarities attracting.  Low IQ women will be attracted to low IQ men even if the IQ levels are not exactly the same.  Low IQ women take what they can get in order to reproduce and low IQ men get some acceptance that way.  The very strong female urge to have babies drowns out other considerations. And that is in fact one thing we do clearly know about low IQ women:  They do have lots of babies.  And it is their babies that pump up the low IQ male population

So we have to look not only at what men and women like but also what they will do without.   I remember a related phenomenon well.  I have done a lot of things in my life and I once ran a large boarding house in a poor area.  It was very instructive in a number of ways, not all of them bad.

And one thing I remember is the partnerships I observed among my clientele and their friends.  In particular, I observed that even pumpkin-shaped women had partners.  Fat is a huge social handicap so how did they manage that?  By being very tolerant, by overlooking a lot.  Their partner might be a boozy, smoky, scrawny loser but he was a male -- and the pair did seem to be reasonably supportive of one-another most of the time.  Both were aware of their low level of attractiveness and felt glad to have someone, anyone, in their lives of the opposite sex. -- JR

A reader offers another explanation:  "I believe the simple explanation for the narrower range of females in general is to do with the XX chromosomes they have. There are relatively less genes on the male Y chromosome than the X.  In many cases this means men have nothing to balance any bad genes on the X Chromosome they get from their mother. Basically this means men get to throw one die whereas women get to throw two.  The distribution reflects this"