As a confirmed monarchist I did watch the Royal wedding on TV, mostly on Australia's channel 9.  So I thought I might note here a few desultory impressions of it.

The first thing I liked was all the splendid cars, old and new.  The old Rolls bringing the bride was particularly magnificent.  It was a 1950 Rolls-Royce Phantom-iv.  But there were a lot of impressive vehicles delivering the wedding party. 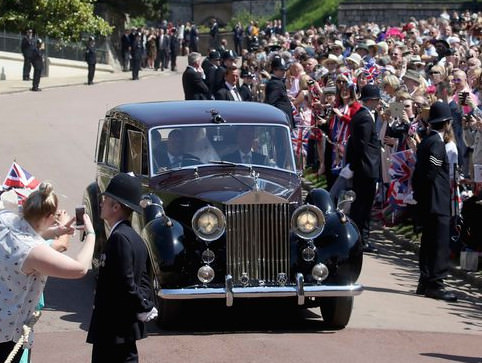 I was pleased to see that both young Princes wore military uniform. They wore the frockcoat uniform of the Blues and Royals  -- which is Harry's old regiment.  Both men were of course fully entitled to wear uniform as both had served in the armed forces in their younger days.  The Royal family is a military family -- as most European monarchies once were. I thought Prince Charles would be in uniform too but he wore a tailsuit in a rather horrible shade of grey.  He obviously didn't want to outshine his sons

It was good too that Harry kept his red beard.  Red-headed kids traditionally got bullied in British schoolyards but with the very popular Prince Harry being a red-head that must have been ameliorated. My father was a redhead so I have sympathy for redheads

It was good to see how Harry and William stopped to greet their Gurkha guards as they entered. Harry did of course work with Gurkhas when he was in the army in Afghanistan. They were the only people the Royal brothers stopped for.  That would have been noted and justly celebrated in Nepal.  The Gurkhas are held in huge respect in England. Here is one reason for that respect.

It was also good to see how the two brothers interacted while they were waiting. They are obviously a great support for one another.

The Dean of Windsor seemed rather tremulous.  He sounded like he might break down.  Since he was running the show, that would not have done.

When it came to the actual marriage service, Cantuar was in good voice -- a most experienced preacher.

There certainly were a lot of Christian expressions from all who spoke. It went on and on, very repetitiously. God was so frequently invoked that one got the impression that he must be hard of hearing. Harry must have been bored but military men learn patience so he outlasted it without apparent difficulty.

There was a pronounced African presence throughout the proceedings, presumably in deference to Meghan's partial ancestry.  The cellist was good but I was unimpressed by the rest of it.  Episcopalian Bishop Michael Curry was very active and dramatic in his speech but all he did was state some extremely anodyne comments repetitiously and with a lot of noise.

But you can't expect much more from the Episcopalians. Homosexuality seems to be the only thing Episcopalians care about. Had the bishop quoted Romans 1:24-27 that might have livened things up.  As it was, his  speech was just way too long.  It was supposed to last 6 minutes but in a rather good demonstration of black ego he performed for 17 minutes. Never in the field of human preaching has so little been said for so long.

The  media generally praised his speech highly but what else could they do with a black bishop from the world's most politically correct church?

Karen Gibson and The Kingdom Choir performed Ben E King's soul classic Stand By Me during the service. It was repetitive but sung with a lot of energy.  I noted that Camilla looked horrified when they came on.  I thought it was just noise.

I noted that St George’s Chapel had a medieval "rude screen", behind which all the "magic" happened -- out of sight of most of the congregation. The chapel was built in the 14th century so it reflects its times.

And I was rather pleased to see beadles in use guiding people.  Is it only Anglicans who have beadles?  I have never seen one on the more Protestant services I am accustomed to.

The departure of the married couple in an Ascot Landau with a big Household Cavalry escort was of course what one expects of a great Royal occasion.  Some of the carriage horses were clearly a bit spooked by the cheering etc but they were well managed. If there is one thing the Royal family and their attendants know about it is horses.  It's an equestrian monarchy.  Even the Queen still rides -- but only ponies these days.

The bride:  I was rather surprised by the strong resemblance between Meghan and her mother, though I suppose I should not have been.  I had supposed that Meghan's fine features would have come from her Caucasian father but clearly she got a bit from both -- JR.